Mapped: Drone Privacy Laws Around the World | Global Drone Pilots Association
admin
January 10, 2021
10:23 pm
From Olympic opening ceremonies to public safety, drone applications have come a long way. In fact, their modern applications are set to almost double the total value of the commercial drone market from $22.5 billion to $42.8 billion between 2020-2025, at a 13.8% compound annual growth rate (CAGR). Naturally, such diverse and complex uses can […] 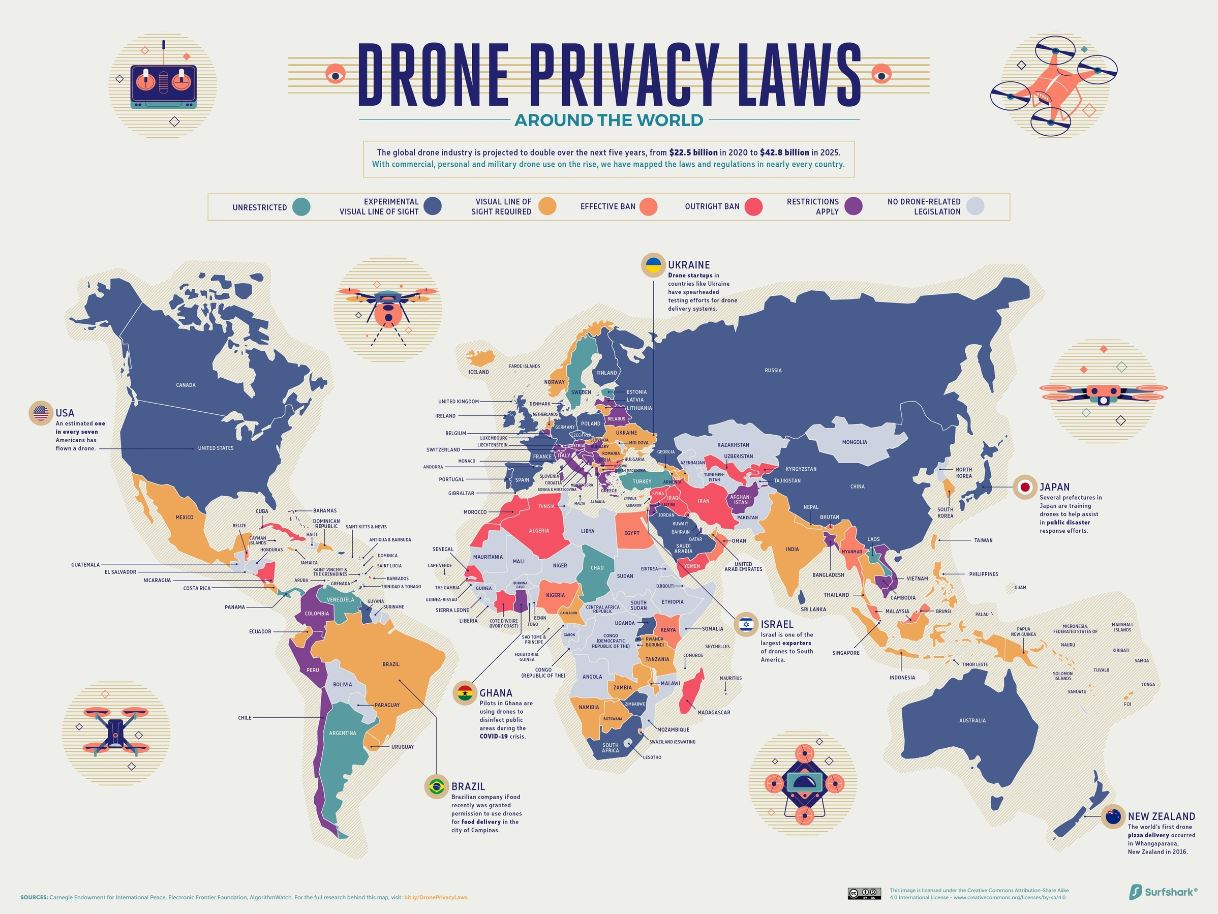 In fact, their modern applications are set to almost double the total value of the commercial drone market from $22.5 billion to $42.8 billion between 2020-2025, at a 13.8% compound annual growth rate (CAGR).

Naturally, such diverse and complex uses can go quickly awry if not monitored and regulated correctly by governments—yet in some cases, it’s because of governments that drones’ use border on sinister.

This in-depth map from Surfshark explores the murky guidelines surrounding drone privacy laws around the world, and some case studies of how they’re used in every region.

According to the map researchers, drone and unmanned aerial vehicle (UAV) regulations typically fall into one of the following buckets:

Categories are assigned based on legislation as of October 2020.

Clearly, there is some overlap among these categories. They are highly dependent on judgment calls made by specific legal authorities and change based on what a drone is being used for.

So How Are Drones Used Worldwide?

The myriad of drone uses are literally and metaphorically up in the air—while they originated in military needs, drone uses now range from hobbies such as aerial photography to supporting disaster relief.

According to the latest drone numbers, 70.5% of registered U.S. drones are recreational, but these proportions may soon decline in favor of commercial uses. As of December 2020, civilian drones are allowed to fly over populated areas, a step towards fulfilling their potential in package delivery.

Meanwhile, countries like Mexico are beginning to rely on drones to combat crime, with good results. In the city of Ensenada, a single drone surveillance patrol resulted in a 10% drop in overall crime rates in 2018. Drones are increasingly being used to monitor illicit activity such as drug trafficking routes.

Interestingly, the environmental applications of drones come into play in the Amazon rainforest. An indigenous tribe in Brazil is using drones to track levels of deforestation and forest fires—and presenting that data evidence to authorities to urge them to act.

Across the continent, drones are also in place to deliver everything from hospital supplies to life jackets in Chile and El Salvador.

The first unmanned, radio-controlled aircraft test flight occurred in the United Kingdom in 1917. The Kettering Aerial Target (or “The Bug”) carried 180 pounds of explosives and became the basis for modern missiles.

While Europe has some of the most liberal drone privacy laws today, that doesn’t mean they’re lenient. Even among countries that allow experimental visual lines of sight (such as Finland and Portugal), special permissions are required.

The military applications of drones persist in this region. Iran was one of the first to use armed drones and continues to do so, while simultaneously banning their public use.

Rest of Asia and Oceania

China-based DJI is the world’s largest drone manufacturer, dominating 70% of the global market. Across Asia, drones have been in use for mass surveillance, particularly in China. In recent times, drones also track compliance with strict COVID-19 guidelines in Malaysia and Singapore.

Meanwhile, in Japan, Nokia is testing out a drone network to provide a more rapid response to future natural disasters. The relief capabilities include disseminating more real-time updates and monitoring evacuation progress. While many parts of Africa haven’t developed any drone-related laws yet, promising innovation is rearing its head. Medical drones are already saving lives in Rwanda, delivering supplies in as little as 15 minutes.

In the same vein, the pioneer African Drone and Data Academy (ADDA) opened in Malawi. The academy promotes drone usage for humanitarian and disaster preparedness, and aims to equip individuals with the relevant skills.

As the uses of drones evolve over time, so will their legal status and the privacy concerns surrounding them. However, the adoption of any technology is always accompanied by a certain level of skepticism.

With drones, it remains to be seen whether they’ll mostly occupy the role of a friend or a foe for years to come—and that power lies only in the hands of those who remotely control them.